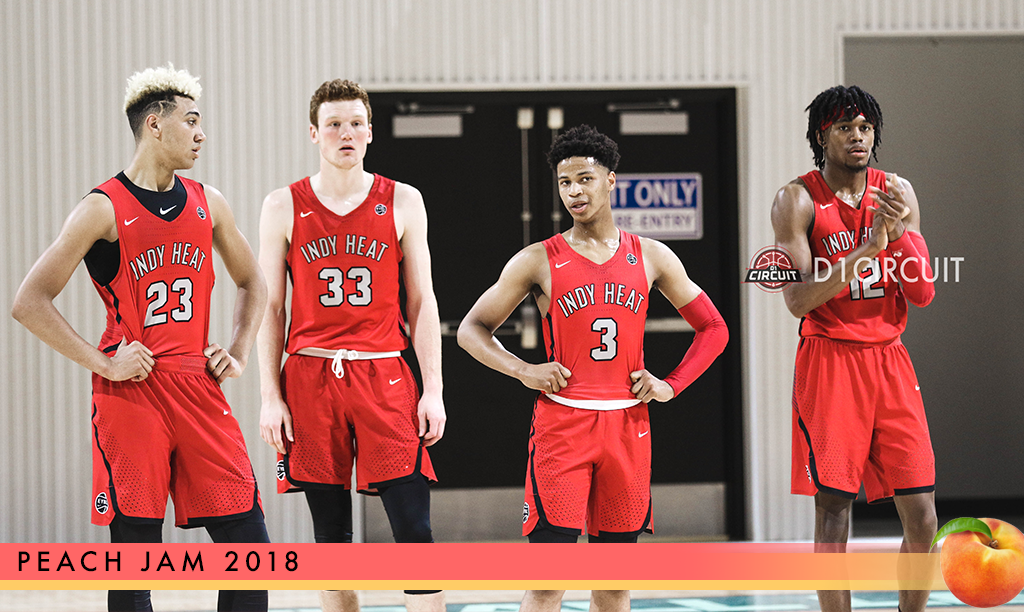 The Indy Heat had an up-and-down spring, highlighted by a 4-0 session while representing home turf in Indianapolis. They went 2-2 in every other session, and while they had a few head-scratching losses, their 9-7 overall record should warrant them contenders in July. They hold a 4-5 record against Peach Jam qualifiers in the regular season, and went 2-1 against their Peach Jam Pool, beating E1T1 and Nike Team Florida while losing to the Oakland Soldiers. The tandem of Keion Brooks and Trayce Jackson-Davis should be a headache for their pool play competition, and if the backcourt can find some heat, they are a threat for bracket play.

Brooks (247 No. 7) and Jackson-Davis (247 No. 20) are budding superstars. In 15 games, Brooks averaged 21.7 points, 7 rebounds and 1.7 blocks per game. He employs an inside-out offensive game, and operates with a non-stop motor. He took his game up to another level in their seven games against Peach Jam competition, raising his scoring average to 23.6 points per game. Brooks is long, explosive and a nightmare in the open court. Jackson-Davis is a slightly bigger version of Brooks, and while he doesnt have the same perimeter game, he’s much more refined around the basket. Jackson-Davis averaged 19.3 points, 7.7 rebounds, 1.9 blocks and 1.5 assists while shooting a whopping 56.8 percent from the floor. Brooks (2nd) and Jackson-Davis (3rd) both made All-EYBL teams, the only other program with two selections other than AOT.

The Indy Heat backcourt is solid, but the frontcourt could use a bit more of their assistance at Peach Jam. Junior Jalen Windham is the shooter of the bunch, averaging 8.5 points while putting up some impressive percentages. Windham averaged 48 percent from two-point range, 43 percent from distance and 95 percent from the line. Point guard Ethan Brittain-Watts receives significant minutes in the backcourt and needs to up his play at Peach Jam. The junior enjoyed a big Peach Jam last season during the Indy Heat’s E16 run, and will need to start playmaking for his big men. Drew Lowder joined the fray halfway through the season, and the Michigan-product chipped in 6.3 points per game despite suffering a near-devastating hip injury in Atlanta. Juniors Harold Bennett (5.2 PPG) and Simon Banks (3.5 PPG) round out a rotation that has plenty of talent, but needs more production. Losing Purdue-commit Isaiah Thompson to a broken foot before the season did not help.

Brooks and Jackson-Davis probably won’t leave the court for the Heat, unless foul trouble says otherwise. They have played off each other with effectiveness through 16 games, and head coach Jason Delaney will be relying on his duo to lift their teammates’ level of play. Junior John-Michael Mulloy averages 4.9 points and 4.9 rebounds per game, and the 6-foot-10 big man takes up a lot of space on the interior. Mulloy plays well without fouling, as does teammate and fellow role player Sean Cobb. Both are Division 1-caliber players, and both will receive significant minutes in July.

The Heat will need to be on their best in order to make it to bracket play. No one averages more than two assists per game on the entire team, so if one of the guards steps up and starts playmaking, it could go a long ways as far as overall offensive productivity. Brooks and Jackson-Davis are studs, but they played in too many close games for our liking. They won two games via buzzer-beaters, and but also lost two nail-biters by two points. They’ll be extremely competitive, and if they channel the late-game heroics they displayed during the regular season, the Heat will surprise.